To complete this lab, you need access to Intel DevCloud. You can log into DevCloud using JupyterLab It is also possible to access DevCloud using a command-line interface via ssh.

oneAPI and DPC++ are open source and there are many resources available online to help you start your project:

This section walks through some example matrix multiplication code to illustrate how to use dpc++ and the DevCloud environment. This requires access to DevCloud via JupyterLab.

Create a Project in JupyterLab¶ 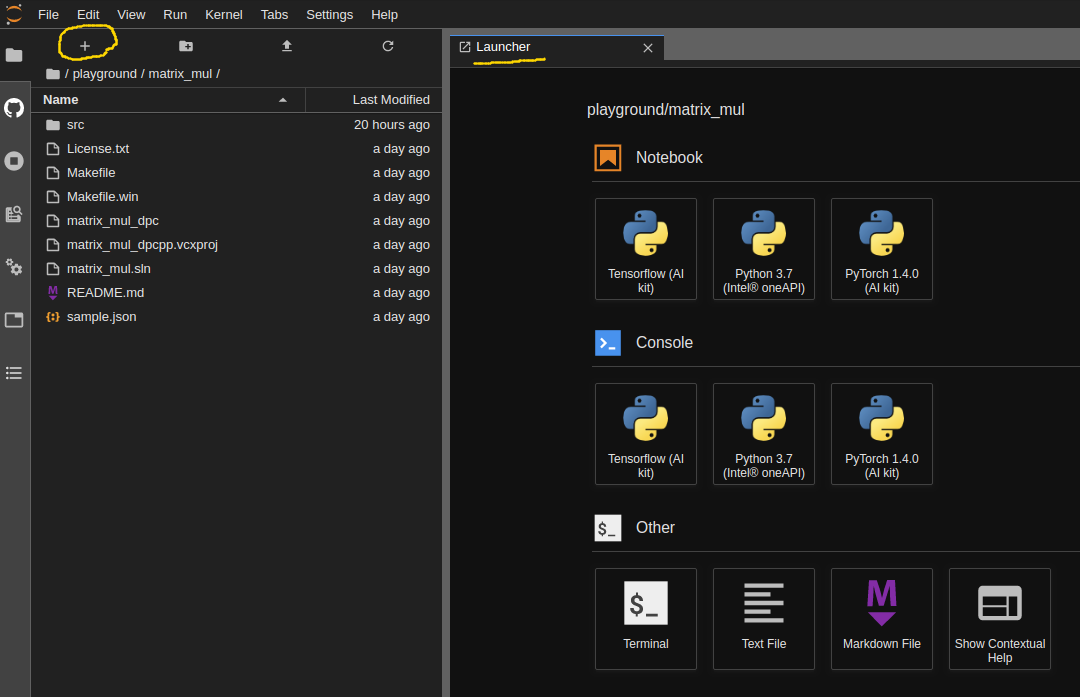 Use oneapi-cli to create the baseline matrix multiplication project. Open a Terminal and launch the tool:

This tool has a basic interface that allows you to choose a project based on its various templates. Perform the following:

This creates several files inside the matrix_mul folder:

The source file is in the src folder and the README provides instructions to compile the code.

Use the terminal to compile and run your code.

It shows the device name used for the matrix multiplication, the matrices’ size, and the testbench result.

The code was run on a CPU. We need to make some modifications to run it on an FPGA.

Synthesizing DPCPP code to FPGAs has similar design flows as other FPGA HLS tools. Since full FPGA compilation to bitstream can take hours, ideally all of the optimizations are done using an emulator. The FPGA emulator compiles the design to RTL. RTL compilation is much faster than full bitstream compilation. Once the emulator is compiled, it can be executed which is equivalent to executing the RTL model with the provided inputs. This is a similar process as C simulation in the Xilinx HLS tools.

To build the FPGA emulator, open the file src/matrix_mul_dpcpp.cpp. Line 55 uses the default_selector for the hardware device. Modify the code to use the FPGA emulator by performing the following:

This allows the compiler to pick the correct device by passing in a compiler flag. ext::intel::fpga_emulator_selector specifies the device as an fpga_emulator allowing the code to be compiled with the FPGA emulator as the target. This performs HLS and generates the RTL description along with the associated infrastructure to simulate that RTL. The emulator can then be run, which is equivalent to performing RTL simulation of the kernel.

A Makefile is available that has all the compilation commands required for the remainder of this exercise. Put this Makefile in the matrix_mul directory.

It is best to submit jobs via the qsub command which allows DevCloud to share the resources. This is especially important for longer running jobs, e.g., FPGA bitstream compilation. It also may be required to run your commands as different nodes are equipped with different accelerators. The default login machine likely does not have an FPGA. Thus, it is good practice to always submit your jobs via qsub.

In order to use qsub, you need to make a simple script in a new file build_fpga_emu.sh that performs the required make command.

You can submit jobs to qsub using the command

qsub sends the job specified in build_fpga_emu.sh for scheduling. It will be scheduled on a node that is suited for fpga_compile using the current directory -d .. You can use the command qstat to see the status of the job. Building the emulator does not take much time, but the process could be slowed if the FPGA nodes are busy.

The results of the run will be an executable emulator file matrix_mul_dpcpp.fpga_emu. Additionally, there will be two files build_fpga_emu.sh.o.XXXX and build_fpga_emu.sh.e.XXXX where XXXX will be a number corresponding to the job ID. The .o file corresponds to the output and the .e file holds any error messages. These will appear in your directory once the job has completed.

The emulator can be executed to verify functional correctness of the design. It is best to test and debug using the emulator since its compilation is significantly faster than performing a full bitstream compilation.

The emulator can be executed using qsub by

Once your code is functionally correct, synthesize it to check your design’s performance and resource utilization. The Intel HLS tools provide the ability to generate reports from the RTL design. These provide the designer insight into the FPGA architecture. They include information about throughput and area (resource usage). The reports contain different viewers that allow the designer to better understand performance bottlenecks and make better optimizations.

The reports are generated as

This do not perform a full bitstream synthesis. It provides an analysis of the RTL. This enables estimations of the design performance and resource usage.

The report is an HTML file in fpga_compile_report.prj/reports. At the time of writing this tutorial, JupyterLab has issues with some combinations of operating systems and web browsers. If the reports are not rendering, make sure to “Trust” the HTML. It may also be possible to open those .html files in a separate tab of the browser, i.e., not within Jupyter. If they still do not render, use SCP or SSHFS to copy or mount your files (including the lib folder from which the report draws its components) to your local drive, then open the report locally.

This shows the resource usages for the different kernels and other system resources.

The kernel names look almost random as these compiler generated. To make the report readable modify the code to name to the kernels:

Add three classes in your code as follows:

Now you can assign each class to one of your kernels. For example, a_init will be assigned to the kernel that initializes buffer a as follows:

Change the other kernels in a similar manner. Repeat the steps to generate a new report. Do not forget to remove the old files before generating a new report. This will make your report more readable:

Click the menu Throughput Analysis and then the item Loops Viewer. This provides detailed information for each step of the process in the kernels:

The Load Store Unit (LSU) Style for the LD operations is shown as burst-coalesced cached. Intel oneAPI DPC++ compiler generates different types of LSUs to manage data transfer between device and host. The compiler uses the burst-coalesced LSU by default. In burst-coalesced mode, the compiler optimizes for buffering contiguous memory requests for the largest possible burst. We can change the LSU type to achieve a lower latency for the load operations. This and other optimizations are part of the DPC++ Matrix Multiplication Project.

Once you are satisfied with your optimizations, you can compile the design to a bitstream and subsequently use that bitstream to execute the hardware accelerated application that runs natively on an FPGA in DevCloud.

The bitstream is generated by

The output is an executable file matrix_mul_dpcpp.fpga. This contains all of the information need to run the code across the host and an FPGA. It includes the binaries for the host and the bitstream to program the FPGA.

The FPGA-accelerated application is executed by

Note that this time we are requesting a different type of node – one that contains an Intel Arria 10 FPGA. The run_fpga_hw.sh.oXXXX file should contain the text

This indicates that the code was run on an Intel Programmable Accelerator Card (PAC) with an Arria 10 FPGA.